It is a tradition to comment on the Gartner UC MQ’s here at the msunified.net blog, and have done so since 2009. See the previous articles here:

The trend within Unified Communications (UC)

The Magic Quadrant for Unified Communications 2013 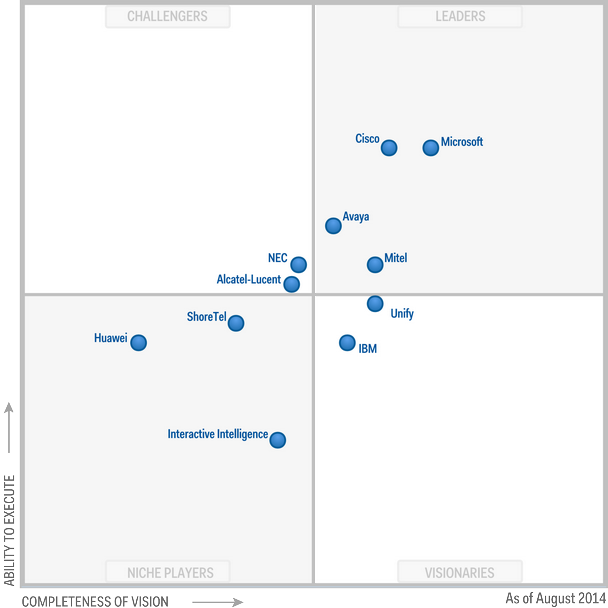 Analysis: What has happened since last year?

My thoughts on the state of UC

I am happy to see that Lync is the leader of the magic quadrant this year. I think it is deserved as well because of the improvements done to the clients during the last year, with the latest iOS features for controlling Lync meetings. As a Chief Technical Architect at Knowledge Factory I have a lot of discussions with clients and Microsoft Partners about Lync success factors. There are three main areas I usually focus on

I like to think that Lync Enterprise Voice is mainstream. We see a lot more companies wants to implement voice in Lync and not just go for chat and see how it goes. Lync was placed in the leader band of The Forrester Wave™: On-Premises Unified Communications and Collaboration, Q2 2014. One of the reasons was this comment:

I totally agree with this statement and that is why you should deploy Lync as the primary communication platform for your information workers. But should you replace your PBX with Lync in your global enterprise? it depends

I talked about Phone Number Normalization in Lync at the Lync Conference 2014 and at TechEd North America 2014. It is clear to me that a lot of organization are moving to Lync Enterprise Voice at a global scale based on the interest and discussions I have had after the talks. Either if its a coexistence road or a replace road the organization is choosing, planning for how you manage those DID’s in Lync is an important topic. Check out the talk for some scripts and tips.

For a fast uptake and rollout of Lync, being able to keep investments made in to meeting room space is important. My recommendation is to implement video interop MCU’s like Pexip, Acano and look at what Polycom are doing in terms of integrating with Lync. There are two effects to be gained by this

In terms of rollout in these scanrios, you ensure that Information Workers are able to fully utilize Lync and you also kill any religious debates on technology choice on devices vs meeting rooms.

At Norwegian Lync Day 14th of october 2014 we have several sessions that goes in to details on how to keep ROI on existing meeting rooms and how the actual integrations work.

There is two types of public cloud offerings. You have Lync Online in Office 365 and you have hosted Lync with Enterprise Voice. Now with the Lync Hosted Edition being deprecated by Microsoft as of summer 2014, hosters now have to be in a gray zone in terms of supportability. They still can differentiate themselves by offering Lync Server 2013 Enterprise Edition and separate customers with address book segregation like you have to do on Exchange 2013. The only loss is the multitenant switch that allowed hosters to separate customers with federation settings.

What many people are forgetting now a day is this: Lync Online and a hosted Lync solution is only best effort in terms of call quality since it is delivered over the internet. Here is where I see a big opportunity for hosters, they can deliver a hosted solution, over MPLS to their customers and do quality of service (QoS) and make their solution in to a true hosted PBX replacement. This is a real opportunity in the market today until Microsoft decides to do this themselves in Office 365. That is not going to happen within this investment cycle (3 years) at least.

You also need to remember devices and wireless networks in terms of call quality. There are now several vendors certified for optimizing wireless traffic for Lync voice using QoS. This is important, because the Lync solution is not better than the weakest link, and today and moving forward that is the wireless network. Check out what Aruba does in this space.

To sum it up

In order to succeed with Lync and Unified Communications, there is not one quick fix to rule it all. Lync owns the Information Worker desktop. But what makes it tick under the hood could be a diverse solution made up with interop and the Lync partner ecosystem. This is what makes Lync complex to implement, fun to work with and very rewarding to succeed with. I also see the state of Unified Communications as of 2014 as quite healthy with the partner ecosystem being more mature and successfully expanding on Lync core features.